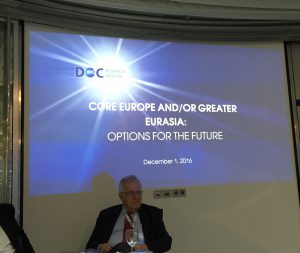 What future should the EU have? Small and united, or large and diverse? A workshop at DOC (Dialog of Cultures) research institute invited 50 experts from universites and think tanks to discuss the future of the European Union. Here are some of key statements. A book will be published later.

The EU has never before faced as many existencial risks as now, #Walter #Schwimmer states, also citing Jean-Claude Junker, who sees the Union at a point where things may „explode“. A high unemployment rate of youth and conflicts among member states cause serious problems. „Der Laden kann uns um die Ohren fliegen“ Junker stated. – Should Turkey be admitted to the Union, although with several aspects its politics have crossed the red line? – At the same time the refugee crisis forced the EU to carefully consider further steps. Refugees will likely keep on coming to Europe, to seek peace, stability and social welfare. – Brexit is a worst case scenario –  a member voluntarily leaving the Union. –

So, many unresolved questions wait for answers, while the world is watching. Is enlargement the way to go? Not all members are convinced that it would work. And: Will the EU become a union of Europeans? Prosperity, stability and peace are common goals – It is time for ideas and visions!

In geopolitical discussions the EU is often a missing factor, #Raffaele #Marchetti, Professor for International Relations states, although it is an important player in world politics and wanted as partner by many. Now the EU is faced with a fundamental choice about its future: to stick with its exclusive partnership with the US, or to try to build up a cooperative system that is inclusive and beneficial to emerging and re-emerging powers. There is a window of opportunity now to reduce ongoing polarisation trend on the international level.

„The EU is at a crossroad“, says Dr. #Winfried #Veit, senior Lecturer at Freiburg University. He adds that the financial and the migraton crisis have split Europa into a North and a South division, and a division between East and West has split Germany and the rest of the EU. The future of EU as a „small but beautiful“ union that is fully integrated, democratic, dispensing a common foreign and security policy, with adequate structures and fully functioning –  a small and more powerful union.

#Adrian #Pabst, Professor of Politics in Lille, names the numerous areas of conflict: internal and external for the EU. He sees „tactical positioning and reactive improvisions rather than strategic thinking and long- term planning. Europe has failed to put common ground into people´s shoes. Both soft and hard power approaches have failed to create a pan-European security architecture. A new security order was needed and a healing of the breach with Russia.

Dr. #Klaus #Wittmann, Aspen Institute, looks at the EU and Russia and states very different percenptions of each other. Putin´s Russia would need ´new thinking´ in its foreign and securit policy as part of an urgent modernization. The West should faciliate this.“We need to find common interest“ he states and calls for patience, „the road from the GULAG to Hyde Park is long!“.

#Martin #Hoffman, German-Russian Forum, blames the media to a great deal for creating mistrust and misunderstanding. He critisizes that political statements were rejected and politics would not get voice and time. Dialogues were needed between civil societies and people needed to be given a voice. Schwimmer added: Part of that should be youth exchange.

#Vasily #Fedortsev, Head of Baltic Regional Inforamtion and Analyticla Center, Russian Institut for Strategic Studies, sees Germany and Russia as two potential global players on one continent. He takes at a wider perspective and sees changes in European security architecture as a result of US changes in foreign politics. Germany is a leader within the EU, which developes a new framework for its foreign and defense politics, within which the EU-Russia relations are seen as a still unresolved problem.

#Peter #Schulze, Prof. at Institut of Political Sciences, wonders if we are sleep-walking into a major crisis. Until 2014 no defence or security structure were set up. The Ukraine conflict was a game changer, but at the same time Putin is one of the most liberal Predidents of the last decades, he states. „An interest-based dialogue to build a robust European security architecture, stressing common responsibility and  including Russia, must be started“. To be added from the follwing discussion: Russia has little experience how to deal wiht small states – it will have to learn.

#Lutz #Mez, Berlin Center for Caspian Energy, FU Berlin, takes a close look at the energy situation in Europe and its dependencies on imports that reached 53 % by 2014. Energy mix of the 28 EU states is dominated by oil and gas. Here and in solid fuels Russia has a leading position. The region´s dependence on transit countries for the marketing of Carbohydrates lead to the question of wheather political factors even allow a diversification of the transport of routes and an increase in production.

Birgit Wetzel EU and China have mutual interest in intensifying their trade. Central Asia, located in the middle, does not have a long term strategy. But also neighboring Russia keeps a close look at what it considers its backyard. China, Russia and the EU have differing concepts for the future. Talks should start now to avoid arising conflicts. Terrorism could be a topic of common interest to start talks with.