Great amounts of rain falls hit Tbilisi last night and devastated part of the city. Cars were torn from the streets and people washed away – some are still missing, 24 h later.

Wild animals from the zoo were wondering around town. Cages had been destroyed by the rain and freed bears, tigers and crocodiles. A hippopotamus has been found roaming the muddy streets.

Here are some sights of the city, the way it looked until just a few days ago. 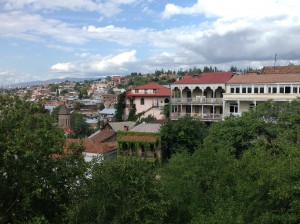 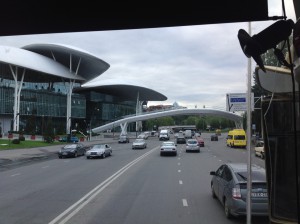 Georgians have been wondering about the weather changing – that started about three years ago: There is more rain, there is rain in times were there used to be dry times, and many more storms than in earlier times. 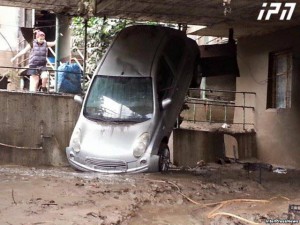 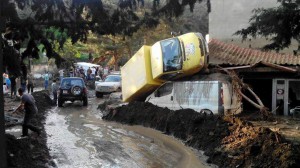 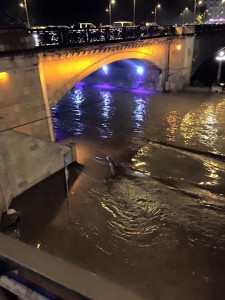 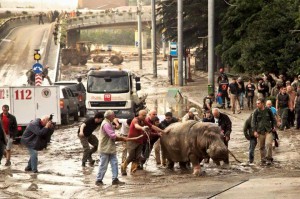 Tbilisi, 15 June 2015 – At least 12 people have been killed in severe floods which hit Georgia during the night of Sunday, 14 June 2015 when heavy rainfall caused the Vere River in Tbilisi to overflow. Monday 15 June has been declared a national day of mourning for the victims. The Prime Minister of Georgia Irakli Garibashvili made the following statement:

“All of Georgia stands united today in mourning the victims of the deadly floods which hit the country this Sunday night. The disaster claimed the lives of at least 12 people and caused irreparable damage to countless homes. Our thoughts are with the many families affected. Particularly, I wish to personally convey my heartfelt condolences to the families of the victims who mourn the loss of a loved one. The nation stands behind you in these difficult times.

The solidarity and support which Georgia has received in response to this disaster has been overwhelming. The international community immediately mobilized significant human and financial resources and I have received countless messages of support from my foreign counterparts. In this hour of need, we are grateful to count on our solid international bonds of friendship. In our own country, we were moved by an unprecedented show of solidarity as volunteers took to the streets to help with the relief effort. Their individual contribution has been tremendous.

In the aftermath of the tragedy, the Government of Georgia is taking all measures necessary to ensure every individual or family affected by the flood has access to full and immediate support. We have already provided temporary housing to over 60 families and mobilized all state agencies towards the relief effort. Detailed information of all damage incurred is being recorded to ensure assistance is systematically given where needed. As Prime Minister of Georgia, I personally vow that not a single family will be left without attention.

The destruction of Tbilisi zoo is another tragedy that should not be forgotten. It has led to the loss of many animal lives. Following the escape of several animals, our law enforcement officers are working around the clock to bring the situation back to normal in the shortest time possible.”