A new study shows great chances and also challenges for the mutual partnership. The Ukraine conflict leaves straces on thinking and strategies for energy partnership.

Last week a conference took place at the elite Nasarbayev University in Astana to discuss the Strategic Perspectives for Bilateral Energy Cooperaion between the EU and Kazakhstan. A study by Frank Umbach and Slawomir Raszewski, EUCERS (www.eucers.eu).  It anaylses in depth the geo-economic and geopolitical dimensions in competition with Russia and China´s Central Asia politics. Initiated by the Konrad Adenauer Foundaton (www.kas.de), the conference introduced the study to about 100 experts and students.

While Russia sees Central Asia as its backyard, China has its plan rolled out with the strategy of One Belt One Road (OBOR), where it prioritizes and high lights areas of interest in Cental Asia, reagion by region. Both strategies do not match and it seems likely that at some point both great powers will meet and raise their claims.

While the strategies of the big powers are driven by their own agenda, the EU at the same time wants to cooperate to meet the needs of Kazakhstan on its way to a consolidated and democratic state.

Kazakhstan and the EU have a mutual interest. Kazakhstan has rich energy resources: Oil, gas, and uranium. Also rare earths are available and a scarce resource many would like to have. But Kazakhstan is still a young state in transition, it needs more knowledge in several fields, in state mangement, in economic fields, in the agrarian sector and in education and reasearch.

The EU can offer all of these. But what the EU needs is gas, oil, and uranium, as well as rare earths. So it seems quite obvious that there is a mutual interest to exchange what you have and what you need. For that reason an ENHANCED PARTNERSHIP AGREEMENT between the EU and Kasakhstan was signed December 21, 2015. (See previous blog).

Dropping prices for energy leave Kazakhstan with problems to finance its state budget. So it would be a win-win situation if the EU and in particular Germany could support the installation of renewable energy production and at the same time buy oil and gas from Kazakhstan. Renewable energies could play an importat roel. So far they make up for 2 percent.  Renewables seem expensive, but after the initial spending, the  investment pays back and that is for many years. With the climate given, solar and wind power generation could play a great role in Central Asia.

Next year Kazakhstan will host the EXPO 2017 – its motto: Energy of the future. Renewable energy will be in the focus.

What the EU needs to consider is that some kind of cooperation between all exterior great players in Central Asia should be reached to avoid disruption or clashes. Central Asia can be the center of peaceful trade between China in the far East and Europe in the West. Kazakhstan will be the player in the middle. It already delivers carbohydrates to Russia and China, and oil to the EU. If also Central Asian gas would be exported to the EU it would support the Southern gas corridor. More Gas will be needed in Europe, even with rising enery production with renewables.

Also, the EU needs to mediate in numerous conflicts along the route from Central Asia to Europe, i.e. Karabakh, South Ossetia, and Kurdish areas of Turkey. There is a common interest of all in the region to fight terrorism.

Increased dialogues and cooperation with Kazakhstan and with all big players in the region must be helt in addition to keep up good cooperation in the neighborhood, as is the pland and motto of the OSCE this year. In that sense, the enhanced Partnership Agreement signed in Decmeber is a first step and a good sign. Foreign Ministers of all five Central Asia states were present! 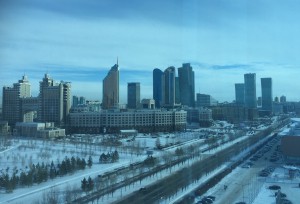