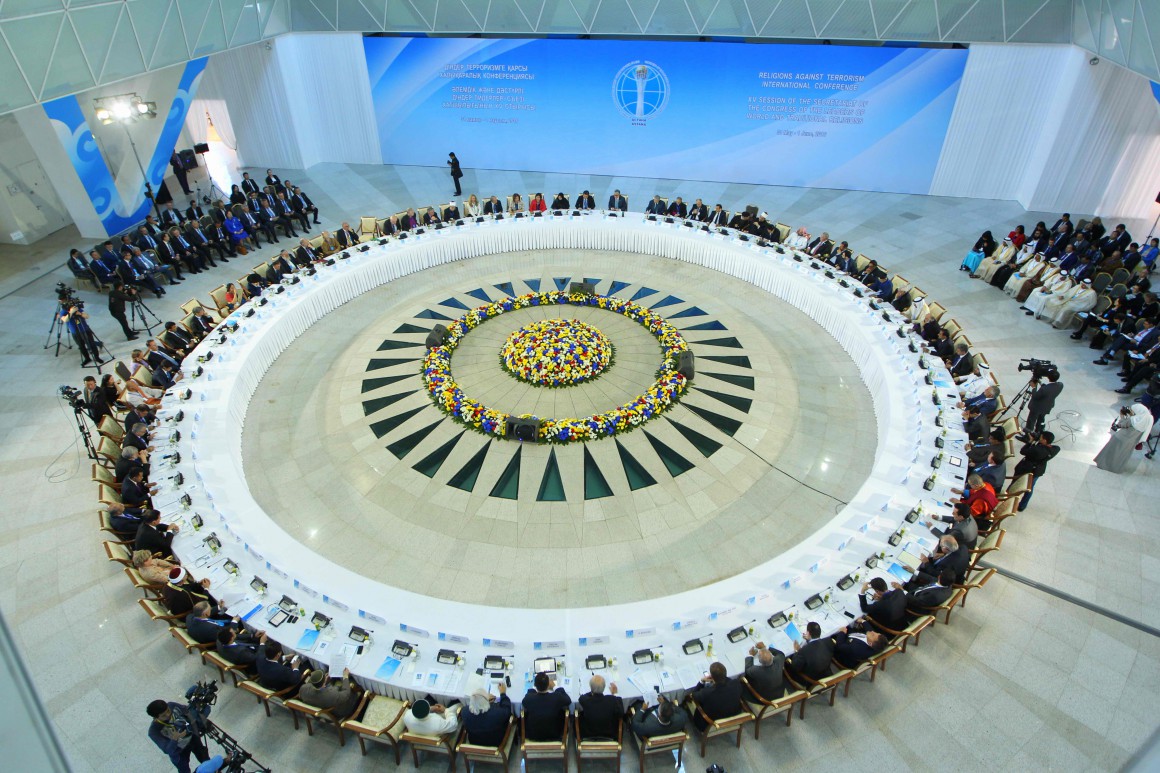 The table is as big as the topic: How to fight terrorism? This conference was set up for international leaders of world religions and international institutions. It took place in the Pyramid of World Religions in Astana, Kazakhstan.

What an amazing get together: Participants from almost all parts of the world joint the debate to state their point of view what needs to be done. Representatives of Islam, of Christianity and of Judaism, of Buddhism and Taoism, of Hinduism and more. All came by invitation of President Nasarbayev of Kazakhstan. But since he had Russian President Putin dropping in for a visit, the welcoming address was brought out Kassym-Jomart Tokayev, Chairman of the Senate of the Parliament in Astana.

International state representatives of all kinds of institutions involved in the fight against terror were present to listen to each other for advice and to exchange points of view. Common ground was seen quickly: „We need more efforts to fight terrorism“ and „We need to come together as one“ Tokayev stated. „Unity through diversity“ was one of his well sounding phrases. But how to do it?

As the conference progressed, these key statements we repeated in numerous versions, languages, dialects and ways of telling a story or citing from the bible.

First speaker, Dr. Amal Abdullah Al Qubaisi from United Arab Emirates, reminded that all have responsibility. Time had come for a multi-dimensional strategy, and more ressources were needed. She stressed that the roots for terrorism were multi-faceted: poverty plays a great role in some parts of the world, as well as education – it needs investments in knowledge systems. Religious leaders could play a vital role to reach people in their values. She appealed to political leaders to make responsible laws. „We need to protect our believes and values“  she stated. „Humanity is what we need to protect!“ And she called for more leading women. „They see different aspects, they need to play a more important role“, Dr. Abdullah stressed.

Christine Muttonen followed and repeated the same topic, adding that diversity in many aspects could be an invaluable tool, if we „respect and learn from each other“. Everybody had to be included, and „women are most valuable partners.“

Khaled Akashed, third speaker, and from the Pontifical Council of Interreligious Dialogue, brought up two major questions: “ How did we get into this phenomenon“ of terrorism – and „how done get out of it?“

„Do we live our values?“ Inguna Sudraba, chairperson of the parliamentary group from Latvia questioned Western lifestyle. Has money making become more important than Humanitarian values? There was no answer, but later speakers had even more questions from the field of international politics. Some speakers named crises and war zones to questions values and reality.

While quite a number of speakers found numerous political fields to be adressed, none of them looked into their own garden or country!

All agreed that terrorism is hijacking Islam. Terrorism is one thing, Islam another. While leaders of Islam explained with diverse statement, non-Islam leaders could listen to a variety of explanations. At the end it seems very clear: Terror is Terror – and no religion, no faith, no world of fidels and un-fidels. Terrorists are hijacking a religion.

These facts need to be transferred and communicated: to all religions, institutions, nations, governments. We need more dialogues to get to know each other better, we need to learn more about each other’s religions, believes, values.

And we need more in depth journalism to bring the messages across for people, everywhere.