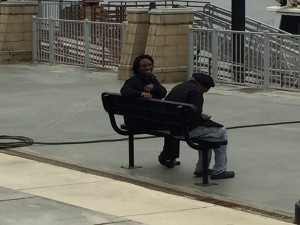 All people can sit anywhere now.

But: Have you heard about Rosa Parks? In 1955 she, a middle aged woman, was sitting in a bus, in one of the first rows, when she was asked to get up to leave her seat to a white person. She was tired and refused. The bus driver called the police to get her out …and into prison…it sparked protests and the Civil Rights Movement.

The movement has gone a long way and achieved a lot. But still equal chances have not been fully achieved. There are segregated  communities in many towns. Inequality is present in many heads, as you could see from the amount of police violence used against dark skinned people.