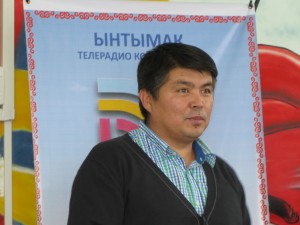 Radio and TV stations are just as common in Central Asia as they are in Europe. But in what language do they bring out programs for a multi ethnic community, as there is in Ferghana valley? PEACE is the one message.
In Osh, in the center of ethnic conflits, YNTYMAC TV and radio station broadcasts in several languages: 60 percent in Kyrgyz, and 40 percent in Uzbek and Tajik. The staff is mulit ethnic as is the programm. Braodcastings started only one year ago, initiated by the Kyrgyz government. Critics can assume the program wants to spread Kyrgyz language, but then it also could help to easy conflicts and to create understanding for all in the region. Until today, most people have to rely on their personal networks to get news or real information about what is happening, where and when.

The new broadcaster wants to bring out information for all to create understanding and peace. Even though there is a dominance in Kyrgyz, YNTYMAC is a chance to give more information about people and what is going on in the area – across borders and ethnic groups.

And what is the opinion of some young students in the area? Do they like the station that started only one year ago? See next blog!