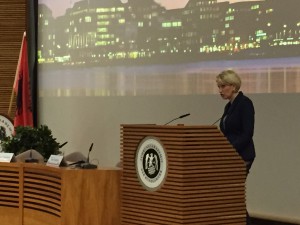 „Build bridges, not walls“ was the most important message the Albanian Minister of Defense Mimi Kodheli brought out in her speech in Hamburg last night. „Do not forget the West Balkans, we share your values“ was another and „Keep up the vision of Europe for us Albanians and for all of us.“

The Albanian Minister of Defense called for the EU not to forget the West Balcans and not to think in stereotypes. She herself gave a good example: A woman in high power, blond, tall and upright appearance.

The short and very clear message was a call for the European political actors to keep the EU as a Union, to be aware of the values they share and to keep the vision alive also for all those, who are still waiting to become a member.

Mimi Kodheli grew up in times of strong dictatorship in Albania. She knows what totalitarian and dictatorship mean for each individual’s live. Now Albania is a member of NATO. But she reminds the audience that „peace and stability in the region cannot be taken for granted.“

„NATO member countries are recently facing various threats coming from the East and South“ Kodheli states. „We must not forget the region [the West Balkans] can easily be affected by the international turmoil, due to their instability and vulnerability“.

Beside the international threats Kodheli points at the rise of nationalism in Russia and its threats, that are not seen as open. „Russia has a clear and concrete project for the Balkans“, „money, banks, businesses, tourist infrastructure, gas and fuel companies in the West Balkans are targeted by Russia’s money. Russia’s economic presence is growing steadily I these times of difficulty for the West.“

Kodheli concludes: „Taking into consideration the significance of the security environment today, we have to move faster!“

Kodheli’s clear words point at one of the weak points: The dangers of the driving force of money coming into Europe from Russia. The Balcans and South Caucasus have a much more refined sense for the winds of change.