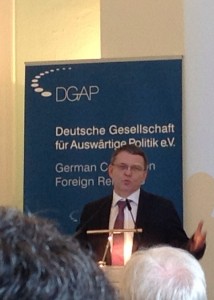 „EU – our uncompleted mission“ – the title was promising, but as daily politics went on it became even more interesting: speech of FM Lubomir Zaoralek. (Lubomir – translated: the peace lover).

Without going into further details he draw an impressive picture of how intensely the historic experiences  are still alive in today´s politics:  It must have been quite a debate in EU on different values and standarts. „We are closer to Ukraine than to Fance or Italy.“ Within the EU, the gap still has to be narrowed.  „Economic ties are important, but also human ties. Human rights are very important!“

Comparing to the beginning of WW1 (1914) he stressed that times were even more difficult now: „We have a double task.“ and „We have to be clear.“ His country had a clear and unanimous voice.

Watching and hearing him speak, you could feel how difficult it must have been to get to a common point of view within the EU.  „Germany made inclusive politics“ FM Zaoralek stated.

Mission completed? No, not yet, but amazing to see how the EU has managed to speak with one voice. 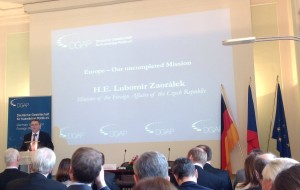