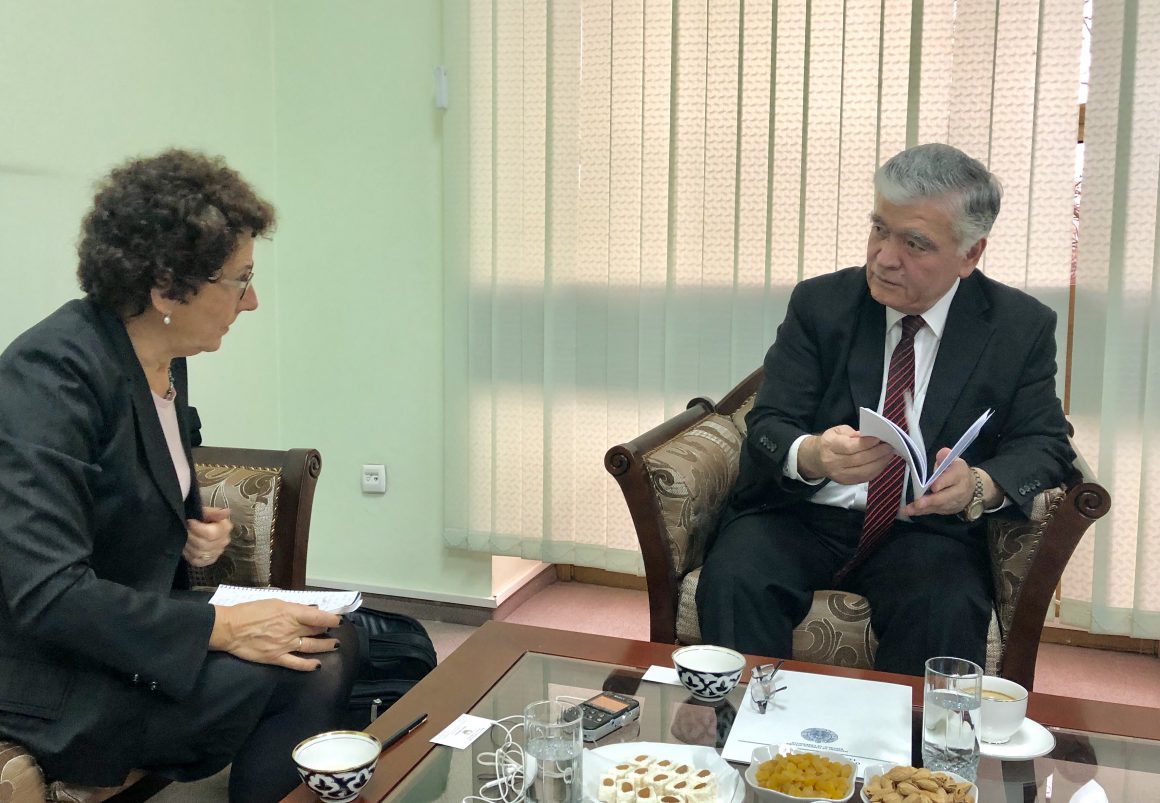 Uzbekistan is in the center of Central Asia. With its new President Shavkat Mirziyoyev the country has opened itself up to the world – after years of self isolation. The new developments are of great significance for all of Central Asia. And they are important for trade to and from China.

Talking about our bilateral relations, I would like to stress, that we know Germany very well. Germany  has big political and economic and historical and cultural potential. We know that Germany is also the power house of the European Union. We, in Uzbekistan consider Germany as one of the important partner of Uzbekistan, not only in Europe, but in the world, because of its potential. I am very happy to inform you that my diplomatic career began from Germany. In July 1993 I came to Bonn to open our first Embassy in Europe. We have spread our Embassies in Europe from Germany.

Of course it was 26 years ago. That is why I am very happy to say that today Uzbek-German relations have a dynamic and stable nature. From the beginning our President H.E. Shavkat Mirziyoev attaches great importance to strengthening bilateral relations with Germany in political, economic, and humanitarian spheres. I am also very satisfied that we are sharing similar views on many key international issues, such as fighting against international terrorism, nuclear proliferation, extremism and drug trafficking. You know that It is a big problem, not only in our region, but in the whole world. And we are very actively cooperate with Germany in United Nations. And we support each others positions in all bodies of UN. We think, that Germany has a very big political and economic and historical potential, that is why we think Germany should be a permanent member of the UN Security Counsil. And we always support from the beginning that Germany should be a permanent member of this council, and Germany should play its high role in the world’s Global issues.

I remember that ten years ago we first officially supported Germany as a permanent member in the UN  Security Council.

Talking about economic cooperation and trade – what we have today does not correspondent to our potential. We should do everything to increase our trade potential between Uzbekistan and Germany, because we know Germany´s economic potential and we have good relations with many wellknown German companies: MAN, Class, and Linde, Deutsche Bank, Commerz Bank, Raiffeisenbank, and many others. That is why we deeply interested to increase trade with Germany. I am sure that the upcoming visit of our President to Germany and the Business Forum in Munich will have a good impact on increasing trade turn over between Uzbekistan and Germany. And  it will give us also the chance to sign many contracts.

At the same time we have a lot of untaped reserves in Uzbekistan and Germany. You know that our Prime Minister visited Germany in 2016.

In Munich he met with many interpreneurs and leaders of famouse German companies and talked about business between Uzbekistan and Germany.

In Uzbekistan we have more than 130 cultural centers. We created all kinds of favorable conditions for all nations, including Germans, who live in Uzbekistan, with their religion and culture and traditions.

We have good relations German Universities. Many Uzbeks study in German universities in Bonn, Munich, Berlin, and others cities of Germany.

Is there going to be talk about a German University in Uzbekistan, like the one in Kazakhstan, the DKU?

German Language is very popular in our country. Particularly in rural areas. It is very interesting. When I studied in school, I started with German language. We have several German schools in Tashkent. For example the school number number 60 is a very high level school in Tashkent. Four or five teachers came from Germany. Now we are opening many branches of the foreign universities in Taschkent. There are so far about 10 branches of the foreign universities. And now we planing to open several branches from India universities. This year we will open of the Amiti university’s(India) branch in Tashkent. It is a very high level university. And we are also going toopen some French universities. During his last visit to France, our President discussed with French authorities to open some branches of French universities here in Uzbekistan. It is very important to train people. We would be very happy if we had here some branches of universities from Germany, for example Bonn university.

The President from his first day of his presidency, he announced that priority of our foreign policy will be our close neighboring countries.

Two years ago , some experts from many think tanks and analytic institutions believed we had a lot of problems. What problems did we have? Water and border problems, and humanitarian problems such as border crossing, which created a lot of problems and many of them believed that these problems some day would lead to conflict between Uzbekistan and other countries. Openly they said that this conflict would take place between Kyrgysystan and Uzbekistan because of border issues, andbetween Tajikistan because of water issues. That was two years ago. But now, thanks to the very open, constructive and friendly policy of our President, according to foreign experts, we could create an absolutely new healthy climate, and very friendly atmosphere, and favorable conditions for developing mutually beneficial cooperationbetween Uzbekistan and other countries, not only between Uzbekistan and other countries, but between all Central Asia countries. And of course for the last two years we exchanged a lot of high level visits. Our President visited all neigbouiring countries. And thanks to the visits we could find solutions on many very complicated issues, such as water and border issues. September 2017 we signed an agreement for the border between Kyrgyzstan and Uzbekistan. Thanks to that, we eliminated all restrictions fort he crossing borders in check points. Between Kyrgyzstan and Uzbekistan, per day 30.000 people cross the border.

March last year we signed an agreement between Tajikistan and Uzbekistan, and 16 checking points are now totally open. Border crossing is very easy and open.

So the border is totally open?

They should come to the check point with their passport and show it and after three or four minutes they cross the border. Thanks to that 25.000 people cross the border per day.

Question: Does that mean that people living close to the border, or also from other areas?

And we will continue this open, constructive and friendly policy.

About changes in Uzbekistan. What kind of changes are taking place in our country? A lot of changes in all spheres. We are opening to the world. Today Uzbekistan is developing on the basis of an action strategy, 2017 to 2021, which was adopted by our President in February 2017.

On the five main areas: First is the state building reforms by creating democratic institutions, by increasing the power of Parliament, by introducing direct dialogue with people and Government. Today we opened a kind of virtual receptions in the President office, the Prime Minister office, and all offices of Ministers. Everybody can call, and tell about their problems, and it should be solved immediately, because everything is under control.

The second direction is the strategy for a juridicial reform. All levels of court will be appointed only after talking with people. This is a big change in our juridicial system. And also to avoid tortures, we are instaling cameras in all detention places.

And third: Economic liberalization. It is very important for us. Two years ago, September 2017, we opened the convertibility of our currency. It was a big problem for the Uzbek economy. And now we are trying to create favorable conditions for all entrepreneurs, and eliminate all kind of barriers for businesses. To attract new technologies, and  innovation programs into our economy, to increase export and bring more tourists are the important task for the Ministry of foreign affairs today.

And we should introduce a real market economy. That is our goal, and the goal of our Government. This is the third direction of this strategy.

Forth: is the social problems. In Uzbekistan we had a big demographic problem. We are growing very fast, each year 700.000 people. Today we have a population over 33mln. That is why we should do our best to protect the vulnerable part of our population, that is children, women, elderly people.

The last one, fifth, is the security problem, religious tolerance, and open, pragmatic and mutually beneficial foreign policy

The second challenge is the water issue. The water problem is now very, very important, because 100 % of our agriculture depends on water irrigation.  Because we do not have a lot of rain. That is why we need a lot of water. Geographically Uzbekistan is located in the center of Central Asia and between the two rivers -Amudarja and Surdarja. But we are downstream countries – Usbekistan, Kazakhstan and Turkmenistan. Kirgisyzstan and Tadjikistan are upstream countries.  And water collection is taking place in Tadjikistan and Kirgisyzstan. Before, in Soviet time, we did not have any problem, because everything was planned from Moscow. They gave water, at vegetation time, it was summer time, May, June, July, August. We gave them free gas, petroleum, oil, other things. But after the collapse of the Soviet Union, we faced a lot of problems with them. Because we began to sale our gas, and oil. But water can not be sold. Because transboundary water belongs to all countries, which cross the tentative boundary according two UN conventions: Transboundary water should not belong to one nation or one country.

But now, thanks to our President policy we could find a solution to this issue also.

The third challenge is transport communication. Because Uzbekistan is a double land locked country. We cannot directly come to the Indian Ocean, or the sea ports. We do not have those kind of seaport. We are exporting our goods through two routes. Southrout – through Turkmenistan, Meshked and Bander Abbas. The second route is through Kazakhstan and Russia to Europe. That is why transport communication is very important for us.

Taking into account these circumstances, Uzbekistan from the beginning of the Afghan crisis is doing a lot. We suggested a lot of talks on Afghanistan issue. In March last year on the initiative of our President we coducted a big internationalconference on Afghanistan with the participation the Afghan president, other high level guests from many countries, including European Union.

Question: How do you see the OBOR („One Belt, One Road“) initiative fitting into your countries future?

Well, we have excellent relations with China. China is very important and potentially very strong neighbor, and we have good bilateral and multilateral relations in the framwork of the Shanghai organization cooperation. Uzbekistan and  Central Asian countries and China having mutually benificial cooperation in the framework of SCOwe actively support each others initiatives.

Russia is traditionally a very important partner for Uzbekistan. The trade volume between Uzbekistan and Russia is growing now very fast. We have a lot of Russian companies working on the Uzbek market very successfully. We do not have any language barrier. Everybody can speak Russian. And it is no secret that a lot of migrants are going to Russia and are working there, because as I said the population in Uzbekistan is growing very fast. Of course humanitarian and cultural relations are also a very important part of our cooperation. That is why the visit of the Russian president in last October was very successful. We signed a lot of bilateral contracts and agreements, and as I have said we planing to open 12 Russian University’sbranches in Uzbekistan

EU is very important to us. Trade with EU is also growing. We are very interested in good economic cooperation with all European countries, including Germany, France, Great Britain and many others.