It is not official so far, but it seems sure: Gas from Azerbaijan will get to Europe, first deliveries in 2019. It is a win-win solution on both ends of the pipeline. For the producer Azerbaijan and it will have a huge effect, as well as on the Caspian region. Several states in the area, including Central Asia will be able to reach the world market with their gas. Once the pipeline is built they should have a good chance to connect. 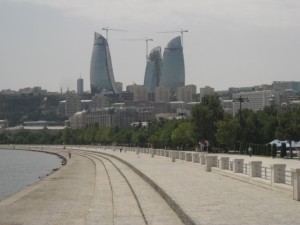 For Europe, new deliveries from Caspian region gas are  a second source besides Russia. More pipelines, more energy security. Two projects were at stake, TAP to Italy, NABUCCO West to Austria. Both were to connect to the TANAP (Trans Anatolian Pipeine) through Turkey , a joint project to be built by Azerbaijan and Turkey, and SCP (South Caucasus Pipeline) already running through Georgia.
It is not official so far, but it seems that Caspian gas will go to Italy. The pipeline will be shorter and cheaper. The route is not favorable to all who are still depending to the Gazprom monopoly, as several former Sovjet states in middle of Europe. They and the EU had high hopes for Nabucco, leading through these states up to Austria.

Sources say, that Greece and Italy will pay better prices. But that is only half of the story. This pipeline also has a political dimension.
But the door is open: Caspian gas will come to Europe. More pipelines, more security, more market.