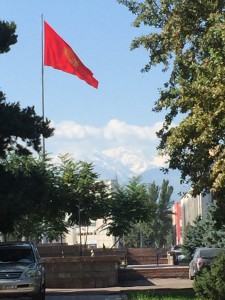 Kyrgyzstan. High mountains cover the vast majority of the country, whose rugged borders separate ethnic groups and whose neighbors showed little willingness to cross-border cooperation on all sides (Kasakhstan, Uzbekistan, Turkmenistan, Tadjikistan, also China, Russia). The state fund was weak, ground treasures are few. The situation is difficult for the small country with its population of about 5 million in close neighborhood of Afghanistan.

Co-operation in Central Asia was difficult after the collapse of the Soviet Union. Nationalities rediscovered their peculiarities, set boundaries, and marched against each other. National leaders in Kazakhstan, Uzbekistan and Turkmenistan rivaled over power and influence.

While new, stiff or rigid structures were being established in the three large territories, the Kyrgyz drove their leaders out of office when they were corrupted or no longer driven by the will of the people. Revolutions shook the capital Bishkek until the path to self-determination and democracy stabilized.

It should go further, and education plays a decisive role. Kyrgyzstan has a young population – the average age is 24. Until now, half of the country´s work force works abroad, mostly in Russia. In order to raise creativity, to create jobs within the country, and to regulate the destiny of the state itself, Kyrgyz youth needs new and better education, kindergartens, schools and universities.

A panel of experts was established along the lines of the groups that the government had already used for reforms in other areas in May 2014. The new Education Public Advisory Council, or EPAC for short, creates transparency and identifies the necessary reforms, informs the public and brings forward the proposals for improvements to governmental bodies. There they are discussed and implemented, that is the goal.

The new body EPAC has already brought forward a lot of weak spots on which urgent action must be taken to ensure that Kyrgyzstan has a future as an independent country. Fighting corruption is important as well as fighting fundamentalist terror. Where, what, when should happen and how, that is where the panel works now. The EU supports the necessary steps for education reforms with programs such as the project “Fostering and Monitoring the Education Reforms in the Kyrgyz Republic” co-funded by Kyrgyz NGO BIOM and Konrad Adenauer Fund.

Press Conference about first project: Fostering and Monitoring of Education Reforms in the Kyrgyz Republic