In Georgian mountain villages about one third of the villagers have left in the past 20 years. Some went to the capital Tbilisi, others left for Europe, some for the USA.

With communities shrinking, it is difficult for those who stay to keep their independence from the valley. 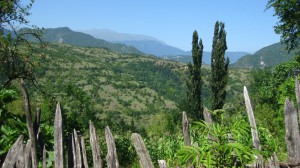 Empty squares show where there had been fields instead of forest. Old villagers remember the time when these areas where filled with crops and wine yards.

Rich crops and fresh air do not make up for poor lifestyle. With more electrical power lines, computers and better mobile phone connections reaching the mountains this may change, maybe!

But to really bring changes it needs a market to which crops can be sold and to get money in return. Ten regular flights from Kutaissi bring West Georgian goods to Russia every week now. But until now village people  do not really trust the change. They see some improvements such as better roads. But it will still be a long way to go before the word of a free market and market economy has spread around.