Giorgi Margvelashvili is the new President of Georgia. At the same time, Georgia is changing its political system into a  Parliamentarian Democracy. Georgia becomes the first real democracy in a post-sovjet state.

Giorgi Margvelashvili won the presidential election of Octobre 27. He is a close compagnion of Georgia’s Prime Minister Bidzina Ivanishvil, who took the lead in the past months, heading and uniting oppositon parties under one umbrella, the Georgia Dream party.

Georgia’s former president, Mikheil Saakashvili, had spent two terms in office and could not go for a third term. During a turbulent decade, Saakashvili – who came to power after driving out Eduard Shevardnadze in the 2003 „Rose Revolution“ – cut corruption, built new infrastructure and revived Georgia’s economy. But people hold him responsible for having a mojor share in the war against Russia in 2008 and for police force used in prisons as well as undemocratic measures against civil society.

Giorgi Margvelashvili will enter his office as a representative for his country, balancing head of the powers as well as head of the armed forces. He has an academic background in philosophy. I had a chance to meet him and talk to him one week ago in Tbilisi. 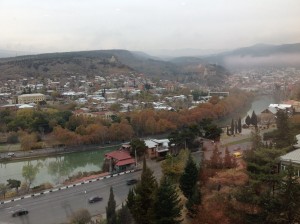